The whereabouts of young Cape Vultures after leaving their natal colony is still unknown. We don’t know where they fly, how far they travel, if they settle at other colonies or if they come back to the colony where they were born once they are old enough for breeding. However, understanding the movement of Cape Vultures among the remaining populations in Southern Africa is crucial for developing conservation strategies for the species.

In our project, we investigate the movement behavior of immature Cape Vultures with the help of modern satellite telemetry. In January 2013, five first-year birds were fitted with satellite transmitters at a colony near Oribi Gorge Nature Reserve in South Africa. The transmitters record and transfer their movement data for 12 hours each day. The first months of data have shown us that some of our youngsters have left their home colony and have travelled far distances to meet other vultures several hundreds of kilometers away. 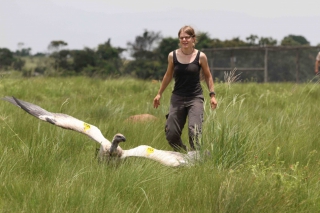 The use of transmitters is the most efficient, but also the most expensive way of tracking bird movement. During recent years, the Bird of Prey Working Group of the Endangered Wildlife Trust in South Africa has successfully applied wing-tagging on Cape Vultures. Each vulture is marked with a number on a patagial wing tag, which makes it individually identifiable. Wing tags have the advantage of being clearly visible even from long distances. In the course of our project, 36 birds have been marked with wing tags. The efficiency of wing-tagging strongly depends on feed-back from the public in terms of re-sightings of the tagged birds and notification to the data collectors. So if you see a tagged bird, please report the location, date and the tag number here:

... to the Cape Vulture webpage. Learn about the amazing vultures of southern Africa and a current research project.