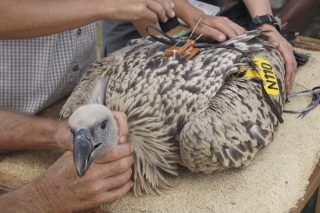 “Sascha” was our little troublemaker. He had a lot of parasites during his capture, and we found him begging for food every time we went to the cliffs to visit the colony. He seemed to be the weakest of our youngsters, but turned out to be the cleverest: After saving his energy by being fed by the parents, he all of a sudden took off. Again, he worried us by disappearing in Lesotho for three weeks and by constantly hanging around near a powerline hotspot. However, his dangerous lifestyle payed off: Sascha was the first bird to show us that the coastal vultures are connected with the birds in the Berg, and that they easily fly several hundreds of kilometers to meet other vultures. Sadly, Sascha collided with a power line in June 2014 and was killed. We were really sad, as he was such a special guy!

... are listed here. Please visit the different "characters" to learn more about their life.