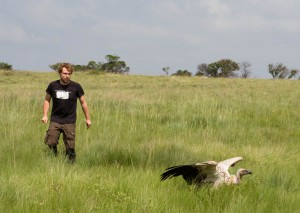 Marie is a first-year bird of the 2014 season. She was the only youngster capture in the 2015 mass capture. Marie was fitted with Sascha´s former transmitter, and left the colony at the end of February. Unfortunately, she had a very short life, and was electrocuted near Colenso end of March 2015.

... are listed here. Please visit the different "characters" to learn more about their life.